Now day security threats are everywhere in the web, new security holes are discovered everyday, but sadly there are no instant patches available. If you are a firefox user, this problem is worse, as it lacks the sandbox feature like chromium or Google chrome browser.

Here’s how to protect yourself from such threats by running firefox in sandbox environment with firejail.

Firejail is an extremely lightweight Linux namespace based sandbox application, could be used with both GUI and CLI applications with minimal effort. Firejail could do even more, like traffic shaping, application spacific DNS server and default gateway etc. etc.

It could effectively run most apps with limited permission and system resource to minimize security risk. There's also a GUI app firetools , to launch and monitor apps with firejail.

Firejail is already in Debian testing and Ubuntu 15.10 (Wily Werewolf) official repository, there are also binary deb and rpm packages available at sourceforge. Download the relevant binary package from this sourceforge repository and install it with your package manager.

For Debian based systems, use this the apt command to install.

Now download the relevant firetools package from here and install it. Firetools requires basic Qt4 or Qt5  application runtime libraries, make sure they are installed too.

Firetools is optional, but it is easy to launch applications and monitor them with firejail.

You could also install firejail in Debian testing and Ubuntu 15.10 straight from the official repository.

Now It's the time to run firefox in sandbox environment, first we are going to do this with command line.

Just this ! Make sure that no other previous firefox instances are running already. In such case use this command

Firetools is the GUI app for monitoring and launching other apps in the sandbox environment, just find the Firetools launcher icon and Launch it. 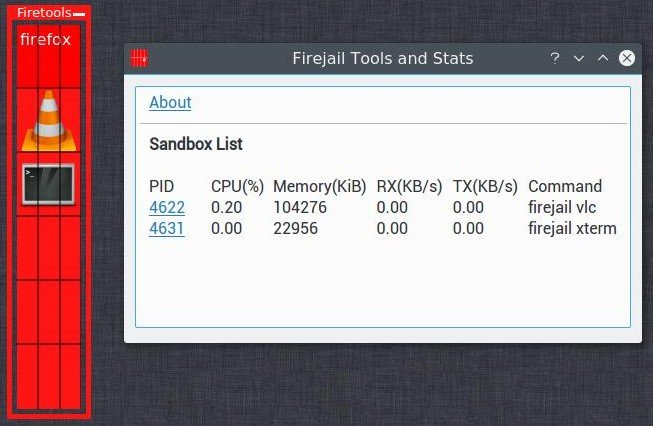 For easy access and quick launching, you may create a application launcher .desktop file to directly launch firefox in snadboxed environment.

Just create a text file named sandbox-firefox.desktop with your favorite text editor and put the text bellow inside it.

After this move the launcher to a proper location.

The Firefox icon may or may not show properly, depending upon your system, but it's fine. Now run secured Firefox from this launcher icon.

Credits: Here is the blog link of filejail original author, the whole thing is explained in much details. So that's it 🙂 If you have any question, please leave a comment and don't forget to share this tip with your friends.