Debian vs Ubuntu, it's a long going argument amoung many linux users, which is better?

Both of them shares a similar OS architecture, package management system, features, and drawbacks as well.

So how they're different? And which one you should use for a specific purpose? Let's find out in this article.

More or less, ubuntu and debian is quite similar, as Ubuntu is based on Debian testing itself. You can check that by running the cat /etc/debian_version command.

Now we'll discuss about the differences and similarities in debian vs ubuntu.

Only Debian stable versions has a specific release date, there's roughly two year gap between each release, and 3 years of support time. More about debian release cycle here. While Debian testing and unstable are continuously updated until they become the next stable version.

Ubuntu is released in a gap of 6 months, and the gap is 2 years for LTS releases. Ubuntu LTS has a incredibly long support time, around 5 year or even more. So you can say Ubuntu LTS releases are like Debian stable in terms of support length, even better.

Both Ubuntu and Debian have the same apt package management system. But their software repository is quite different. Debian was and is always sceptical about putting non-free software in it's main repository. Besides Ubuntu has no such burden, packs everything you need, free non-free, closed source, controversial package, they don't care.

Other than that, Debian unstable is much more cutting edge than ubuntu, and debian's packages are much modular than ubuntu. But wait, Ubuntu has a distinct advantage, inherited from it's large user base and popularity, the PPAs, another vast topic.

Ubuntu's also introduced the snap package manager around 2 years ago. Unlike apt the snap packages are self contained, works independent of distro, available in debian repo too.

However I think snap isn't a great idea, specially for Linux, feels somewhat like windows apps and kills the build from scratch approach.

The truth is you can't see any performance difference between ubuntu and debian unless running some rigorous benchmark. They're neck to neck in terms of performance. However my opinion(observation) is Debian performs slightly better when doing some highly demanding computational task.

Both Debian stable and Ubuntu have comparable security mechanism and vulnerability patching schedule.

Ubuntu comes preinstalled with AppArmor, and many cases even with UFW. But debian has none, perhaps it doesn't need a preinstall access controll system or firewall, as all services are disabled by default. Debian has faith in it's experienced users.

So for beginners, Ubuntu is a better choice from security perspective.

As of the kernel, debian is a clear winner here. Ubuntu's default kernel is literally bloated, aimed to run on a wide range of hardware, makes no sense to me. Meanwhile Debian's kernel is quite trimmed, performs better(I think) than ubuntu's, specially when running some benchmarking tool. You might want to compile a custom kernel to use with ubuntu.

Are Ubuntu and Debian binary compatible? Both yes and no, in most cases a package from Ubuntu's repository works as well as on Debian testing/unstable, unless there's a severe shared library mismatch. The opposite is also true, may be you need to edit the deb package to satisfy dependency.

I've done such mix up many times, like installing from PPA, installing compiz directly from ubuntu repo on debian. Everything worked just fine after some tweaking, hardly anything broke.

But Debian documention forbids such practices, and they've a very good word for it, FrankenDebian, so don't make a FrankenDebian. Anyway, do whatever you want as long as you can fix it later.

Ubuntu vs Debian - As a regular use distro

As a regular use distro, I mean on a laptop or desktop, Ubuntu is better, even for an experienced user.

Ubuntu: Due to it's overwhelming user base, there's very good chance of a PPA of some very recent or obscure software, icon or theme, debian lacks that.

So, if you don't want to spend your day tweaking your OS, then Ubuntu is best. As if there’s any problem with Ubuntu, probabbly it’s already fixed by someone.

Debian: On the other hand Debian is highly fragmented, offers various net install ISO and perfect for build from scratch.

So, if you love to tweak and expeiment with linux, then Debian testing or unstable is a far better choice than Ubuntu, even better than Arch Linux.

If you consider the ease of installation, installing ubuntu is a little easier, but debian's GTK+ installer isn't bad too. So in this ubuntu vs debian battle, it's a win-win from two different perspective.

Debian vs Ubuntu - As a server distro 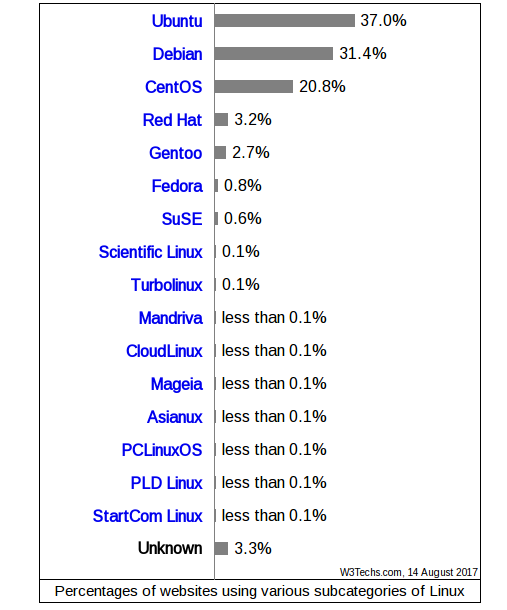 Again they're neck to neck when we're talking about debian vs ubuntu on servers. Both have the capability to run for months(if not years) without interruption, applying updates and patches without much difficulty.

Once Debian stable was the top, but now it's Ubuntu. Perhaps due to it's longer life cycle and ever increasing familiarity among linux users.

So the biggest difference of Debian vs Ubuntu is their targeted user base and package management system. Clearly Debian is for experienced users, while Ubuntu suitable for beginners. Debian still kept the strict free software policy, but Ubuntu doesn't think it that way.

Both of them pursued different goals, Ubuntu tried to improve user experience, implemented some bold changes like Unity desktop and Mir display server.

While debian focused on more technical stuffs like porting to many exotic architecture, implementing the FreeBSD kernel and GNU Hurd kernel, maintaining 3 different releases at the same time.

I hope this is a meaningful comparison of debian vs ubuntu, more or less they're the same, could be tweaked to do whatever(almost) you want, after all both of them are GNU/Linux.

Your comments are very much appreciated, please don't ignore, express yourself.