The kernel is responsible for almost every low level task in any OS. You may want to tweak it to get most out of your hardware. So, here's how to compile Linux kernel from source to build your own custom kernel.

Most cases you don't need to build linux kernel from source to achieve better performance, however there's some other reason to build a custom kernel.

So, lets get started with kernel customization.

First you need to install some development tools and a C, C++ compiler, in this case the compiler system is GCC.

As I'm using Ubuntu this time, I'll show how to install those development tools in Ubuntu and other Debian based distros.

If you want to use a more convenient GUI tool to configure the kernel, also install some Qt app development tool and library.

The Qt based configuration tool is much easier to use then the ncurses based interface.

2. Get the Linux kernel source code

There's many way to download the latest Linux kernel source code, you can clone the kernel git repo, download it from the official site or install it through apt.

I prefer to download the tar.xz archive from https://www.kernel.org/ , extract the archive after downloading it.

Alternatively you can clone the bleeding edge kernel with git.

You can also downoad zip or tar.gz archives from here.

Or install the kernel source with apt, I think it's the worst choice.

That's the most important step of this entire tutorial. A properly configured kernel could save 2 to 3 seconds of boot time, improve overall system performance and responsiveness.

You can copy that or generate your own with the make config , make nconfig , make menuconfig or make xconfig commands.

But manually configuring the kernel is a quite difficult task, so it's wiser to copy an existing configuration and customise it. Example ~

To update the configuration file according to the newer kernel, use the make silentoldconfig command. This step is quite annoying, I just pressed and held the Enter key it.

Now use the make xconfig command to modify the kernel configuration.

You need to be careful while tweaking around various options, a little mistake could result in an unbootable kernel. 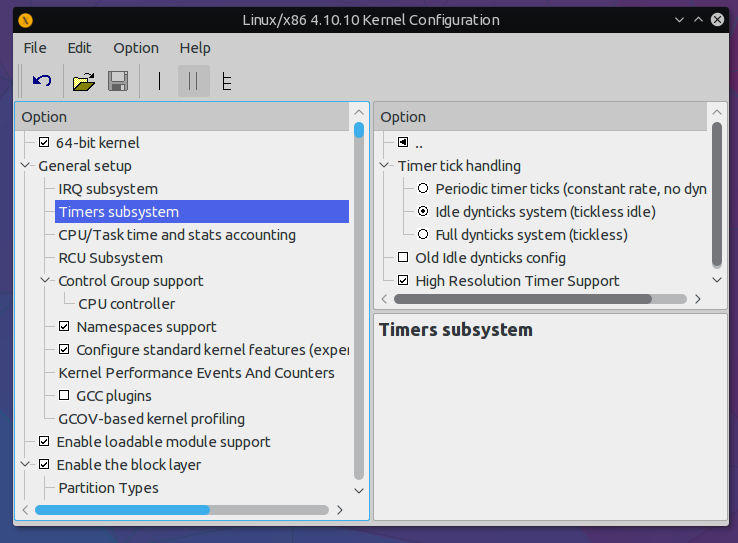 Above a screenshot of the Qt based configuration editor tool, it's very easy to use, use Ctrl + F key combo to easily find different options.

What I changed to make the kernel smaller in size and more efficient.

Here you can get a copy of my .config file, you can use it as a base and customise it according to your need.

If you're planning to use the make localmodconfig command, perhaps there'll be some missing device driver.

The make help command will show some help text, check various options there.

You may also want to minimise the build time with parallel compiling, use the -j option with make , before that check how many CPU cores in your system with the nproc command.

Building distro specific kernel packages is the best way to install custom kernels. It's much easier to manage everything later.

In kernel 4.10.10 and above, there's few script to directly build deb and rpm packages.

The above command will build 5 deb packages in the parent directory, in this case it's the home directory. You need to install 4 of them.

Install the linux-image package at last, else you may encounter some problem. There's no need to create the initrd or update the GRUB.

Now I'll go through the generic way to build Linux kernel and install it. You may not want to compile everything with make all, just compile the kernel and and device drivers.

You don't need to create the initrd file or update the GRUB, make install command will take care of everything.

6. Testing the new kernel and conclusion

Finally reboot your system to test the newly built kernel, select the GRUB entry with your new custom build kernel.

If everything is configured properly, the PC should boot with minimal error. You could check the new kernel version with uname -a command.

You might also want to check kernel errors with dmesg command, and try to fix them, here fixing means recompile every thing.

So what's the advantage of my newly build custom linux kernel ?

Any disadvantage ? Of course, there's few glitch in this kernel.

I spent almost 3 days to make it minimal and usable, and still it's no where near perfect. I've to manually load fbcon kernel module through  the /etc/modules file to get a tty console after system boot.

That custom kernel may panic while booting or could lead to grub rescue. So, be prepared for such troubleshooting.

That's all about how to customize and build linux kernel from source, I hope it's easy enough to understand.

So what do you think about kernel customization and what's your experience ? Leave your comments below.