You might want to send mail from command line in Linux for logging or sending mails automatically for some purpose, obviously not for spamming.

In this tutorial we're not installing or configuring a SMTP server, instead using Gmail's already configured and secure SMTP server.

This tutorial is for almost every UNIX like OS to send mail command line, including OpenWrt, let's get started ...

1. Configure Gmail, or other email providers

As we're using Gmail for forwarding mails through it's SMTP server, obviously we need a Gmail account. But it's up to you, you could whatever mail service, as example Yandex Mail, if you like.

There's nothing much to configure with gmail, just enable access to some apps, which Google considers as "Less Secure".

After logging in to Gmail, go to this URL and turn on Access to less secure apps. 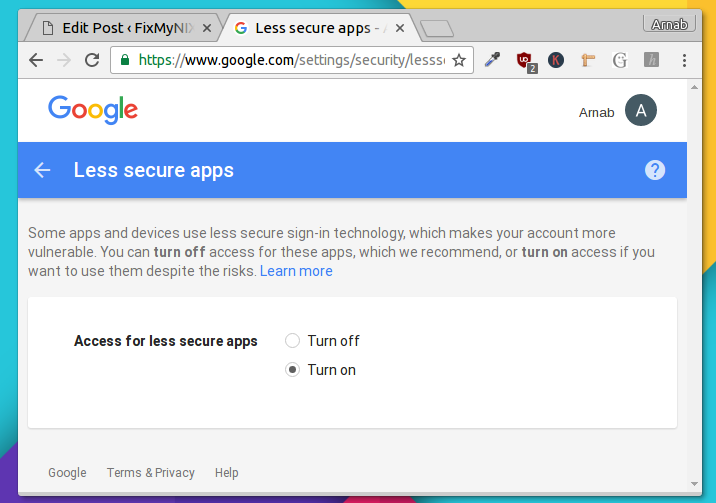 I think other mail services also require something similar, to increase their user's security. You've to configure some more if you're using two factor authentication.

The next step is to install a MTA(message transfer agent), and here we're going to use sSMTP , it's for only sending, it could not receive mails.

Install sSMTP in Debian or Ubuntu,

The sSMTP configuration file is /etc/ssmtp/ssmtp.conf, you've to customize it according to your credentials.

An example configuration below,

Use the man ssmtp.conf command to know more about configurations.

There are many command line utilities to send mails, and in many flavor too.

This command is extremely useful for scripting, fits well with crontab entries, and this time you don't have to configure a MTA like previous commands.

Hope you've found this tutorial useful, though it's not much clarified a bit short, anyway leave comments if you have suggestions, questions or opinions. Have a great day 🙂